The Swans and Lions find themselves in familiar territory on Saturday afternoon, when the Swans travel north with their season in tatters.

Just like they did in Round 7, 2017, the Swans desperately need a win to keep their season alive, their 1-5 start leaving coach John Longmire considering the dreaded 'R' word - rebuild. Keep up-to-date with the latest Brisbane Lions vs Sydney Swans AFL odds at BetEasy.

That day, the Swans kick-started their season with a convincing 54-point win, devastating the Lions with their best first quarter of the season up to that point, booting 7 majors.

Lance Franklin was back to his unstoppable best, kicking 8-goals and picking up the 3 Brownlow votes, while Zak Jones (27 disposals, 6 clearances) and Luke Parker (30 disposals) were the next best.

The Lions had no answers, with a pre-game and half-time scrap doing little to slow the Swans' momentum.

The Swans have enjoyed a decade of supremacy over the Lions, winning their last 11 matches since Round 22, 2009.

Narrow wins in 2016 and 2018 gave the Lions hope of a turn-around, but it looks as though this year may well be their best chance yet.

Both sides find themselves at opposite ends of the ladder, with Luke Hodge and Chris Fagan turning the luckless Lions into serious finals contenders.

Victory against Premiers West Coast in the opening round, and a brilliant comeback win against Port Adelaide in Round 3, announced their return to the AFL's elite, temporarily jumping into the top 4.

After their tremendous start, consecutive disappointing losses brought their season to a temporary halt.

Essendon won their first game of the season, while Grand Finalists Collingwood heaped more misery on a Lions outfit playing more 2017 than 2019.

A return to the winning sheet against Queensland rivals, the Gold Coast Suns, got the ball moving once again.

Geelong castaway Lincoln McCarthy has been a revelation for the Lions, booting 10-goals, while Eric Hipwood showed his future potential with 6-goals against Port Adelaide in Round 3.

Lance Franklin is a huge out for the Swans, joining veterans Heath Grundy, Jarrad McVeigh, Nick Smith and Kieren Jack on the sidelines, while the Lions will have to make do without their key defender Harris Andrews.

20 debutants in the last three seasons all but confirms what many in the media think about the Swans - they're rebuilding.

A win for the Swans gives them - and their fans - hope of a turnaround, and chance to play finals, while a win for the Lions cements their place in the top 8.

Callum Mills vs Cam Rayner
Cam Rayner has had a stand-out start to his second season of AFL football, booting 10-goals from his first 6 games. Playing at full forward against the Suns, he was a hand-full for Ballard and Stanley, booting 3 goals. Callum Mills hasn't had the greatest start this year, struggling as the number one small-forward stopper.

Callum Sinclair vs Stefan Martin
Despite averaging less than his career average in hit-outs, Stefan Martin is revelling in shared ruck duties with Oscar McInerney this season. His impact around the ground is as good as it has ever been, while Swans ruckman Callum Sinclair has been smashed in two of his last three matches.

Luke Parker vs Mitch Robinson
In a battle of the bulls, both were at their best last weekend, with Robinson in the Brownlow mix - not for the first time this season. When Parker is on, he's almost impossible to stop, and will need to be at his best to help the Swans midfield.

George Hewett vs Lachie Neale
In one of the trades of the season, Lachie Neale has elevated the Lions' midfield to new heights, and has become one of the dominant players of the competition. Averaging more than 33 disposals, 4 tackles and 8 clearances per game, he's taken the competitive Lions into finals territory. Hewett will have the hardest match-up of his growing career on Saturday.

Aliir Aliir vs Eric Hipwood
There's really only one match-up the Swans have for the supremely athletic centre-half forward, and that's the equally athletic and exciting Aliir Aliir. Aliir has been one of the better players for the Swans' this year, while Eric Hipwood's 6-goal haul against Port Adelaide announced him on the big stage.

1: Records are meant to be broken. Sydney's dominant win-streak over Brisbane is the last they hold in the AFL. Both teams' finding themselves at opposite ends of the ladder, a win gives the Swans hope, while for Brisbane, it gives credence to their awesome start to 2019.

2: Lachie Neale's brilliant start to 2019 has him firmly in Brownlow contention and has seen him jump to a career-high seventh on AFL Player Ratings. Lance Franklin is the top-ranked Swan at thirteenth.

3: The Gabba holds no fears for the Swans, winning 9 of their last 11 games at the venue. The last time the Lions beat the Swans at their home ground was Round 3, 2009, with the previous win coming in Round 1, 2004.

4: The match will be decided in the midfield contest, with the Lions the 4th ranked clearance team, with 39.5 per game. The Swans are ranked 11th with 36.2 per game.

5: The Swans have not only struggled to score, but move the ball inside their forward 50 as well, ranked 15th in the league with 49.5 inside 50's per game, and have conceded 20 or more inside 50's twice this season - both were away game losses. The Lions have had no such problems, ranked 6th for inside 50s.

IT’S A BIG WEEK FOR…
Lachie Neale has been in red-hot form, topping the league for disposals (207) and handballs (132), while ranked top 5 for centre clearances (17), contested possessions (106), effective disposals (166), ground-ball gets (71), inside 50s (36) and total clearances (48). Sydney's No. 1 stopper George Hewett is going to need all the help he can get from his teammates to apply the clamps on the diminutive elite midfielder. 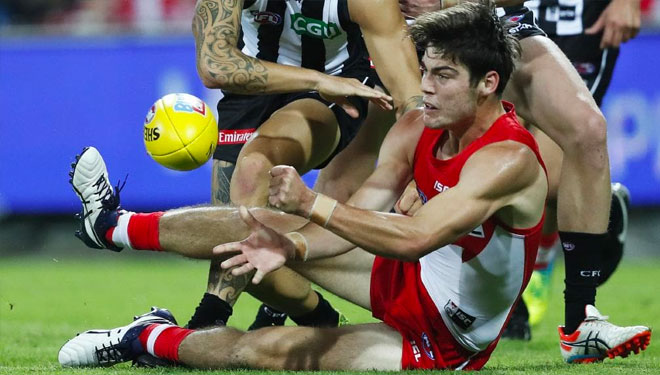