Rising star forward Will Hayward has been named to make his return to the fold on Saturday afternoon at the Gabba, in the Swans' crucial Round 7 match.

Hayward, returning from a three-week stint on the sidelines for a broken jaw, joins midfielder Kieren Jack and utility Robbie Fox in making their return to the side.

Jack will play his 251st match of AFL football after overcoming his latest hip injury, while Fox makes his return following stellar form for the Swans reserves in the NEAFL.

“It’s great to have Will back in the team,” Longmire told QBE Team Selection.

“He’s obviously a very important young player for us and in such a short period of time he’s proven how valuable he is to our front half. He’s been training well for a couple of weeks.”

Jack played his 250th game against Richmond in Round 5, but suffered a setback after returning from a pre-season hip injury.

Longmire said his experience makes a difference to the side.

“You look at our front half and we have some youth up there, which is really exciting for the club, but it’s also good to have some experience around them,” Longmire said.

“Kieren’s got that role in the forward line but also in the midfield if he needs to go through there to add some experience – and we think that’s really valuable for the team.”

Robbie Fox's NEAFL form has been fantastic this season, notching up 37 disposals and three goals in a best-on-ground display in his latest match against GWS last weekend.

Longmire said that Fox had earned his place in the side.

“He was fantastic last week. We had a couple of boys we were looking at potentially bringing into the team and he was one of those,” Longmire said.

“We think the role he can play for us this week will be important, and he comes back into the team with some really good form from last week.” 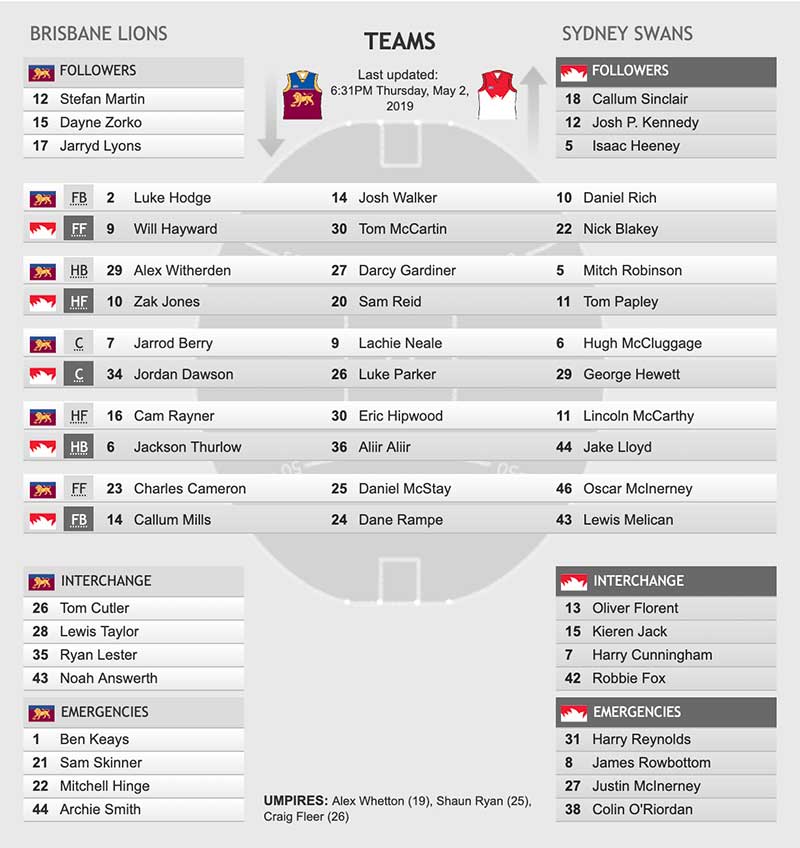 Just like records, droughts are meant to be broken. Some have stood the test of time, others will stand…

The Swans and Lions find themselves in familiar territory on Saturday afternoon, when the Swans travel north with their…