The rejuvenated Swans return to the SCG on Friday night, facing the second-placed Pies, in a game with more than just ladder positions at stake.

The Pies come into the game with an extensive injury list, missing some of their best players in Jordan DeGoey, Mason Cox, Tom Langdon, Travis Varcoe and Jamie Elliot.

Patchy form over the past two weeks hasn't helped their cause, pushed for most of the match by St Kilda, who then capitulated in the last quarter, and by Carlton the week before, relying on magic to see themselves over the line.

Even without their injured and suspended stars, the Pies are desperate to show the dominance that led them to being a whisker away from winning the AFL Premiership last year.

The plucky Swans have come off two thrilling wins over Essendon and North Melbourne by 5-points, both scorelines amazingly 77-to-72, where youth and inexperience have replaced more established players as the injury crisis worsens at the SCG.

Incredibly, Sydney's win over North Melbourne in Hobart extended their run of wins against North in Tasmania to 3-in-a-row, while they fielded their youngest team since 1997, and was the youngest Swans team to win a game since Round 4, 1994.

The last time these two teams met, Alex Johnson made a successful return to football, playing his first competitive game since the 2012 AFL Grand Final - a period that spanned almost 6 years.

Unfortunately for Johnson, his fairytale return turned into a nightmare the following week, but such was his impact against the Pies in Round 20 last year, Collingwood forward Mason Cox lauded the defender on Twitter.

At the time, the Swans were in the midst of a horror mid-season form drop, losing four from five games, including the shock loss to the Gold Coast Suns.

They reached the tipping point between youth, experience and a significant drop in form of established players, leaving the Swans spluttering into the Round 20 clash at the SCG.

An entertaining first quarter between the sides, resulted in 7-goals kicked, 3 to Lance Franklin and 3 to Travis Varcoe.

Collingwood flexed their muscle and dominated the second quarter, with Jordan Dawson's goal splitting an avalanche of Collingwood forward-half dominance, with goals to Josh Daicos, Steele Sidebottom and Brodie Grundy.

Sinclair turned in one of his best quarters of the year, breaking even with Grundy in the ruck, but it was the defence that really drove the ball forward, scoring two of their five goals from defensive chains, while superstar Lance Franklin was involved in everything forward of the centre circle.

Only Tom Langdon having a competition high 18 intercept possessions prevented the Swans from piling on more pain before the final break.

A blast from Nathan Buckley re-invigorated the Pies at the start of the last term, with the Swans gallant defence breaking under the pressure.

Repeated entries from the Pies yielded goals to Will Hoskin-Elliot, Jayden Stephenson and Travis Varcoe put the Pies into the lead by 4-points, while the Swans continued to pick out Tom Langdon almost every time they went forward.

An amazing last gasp goal by then 18-year-old Tom McCartin, who somehow managed to put boot-to-ball while laying on the ground, gave the Swans the last goal of the night, with the Swans hanging tough, pulling out a brilliant underdog win by 2 points.

Callum Sinclair vs Brody Grundy
Sinclair's never had it easy against the elite ruckman, and this season has been no different. Down on form and fitness, battling fatigue and the flu, he's made a stunning turn around in form the last fortnight. He's going to have to lift to an entirely new, stratospheric level, if he's going to quell the best ruckman in the league, who beat him by 41 hit-outs last time they played.

George Hewett vs Steele Sidebottom
There couldn't have been two more contrasting starts to the season - Hewett, well down on form and confidence was a ghost of his season past, while Sidebottom has kept his unbelievable form going, rated elite for effective kicks (10.6 per game), kick efficiency (71.4 percent) and disposal efficiency (77.4 percent). Whenever a team has been able to stop Sidebottom, they've either won, or gone very close to it.

Dane Rampe vs Brody Mihocek
With Jordan DeGoey and Mason Cox missing from their forward line, all hopes will rest on Ben Reid and Brody Mihocek. While Reid has proven himself to be a capable leading forward, Mihocek's ability to read the ball, out-body and out-mark his opponents has been severely underrated, rated elite for marks (6.7 per game) and above average for marks inside 50 (2.1).

Josh Kennedy vs Scott Pendlebury
The two ageing stars are still key players in their sides' engine rooms. Pendlebury showed why he should still be considered an elite midfielder, racking up 38 disposals in a best-afield display in the most recent ANZAC weekend match against Essendon in Round 6. Likewise, Kennedy has been Sydney's most consistent player, rated elite for contested possessions (13.4 per game), clearances (6.6) and ground-ball gets (11.6).

1: Sydney have won three from the last four games against Collingwood, all at the SCG. The last time the two teams played at the SCG before 2016 was Round 4, 2000 - a 5-point Collingwood win.

3: After being ranked 18th in the AFL for scores conceded by turnovers, the Swans have conceded just 144 points in their last two games, primarily from clearances and defensive chains.

5: Sydney's ruckman Callum Sinclair has had to carry the ruck on his own this year averaging 12 disposals and 28 hit-outs per game. Brodie Grundy is the 3rd ranked ruckman in the competition with 40.1 hit outs and 21.4 disposals per game.

6: The Swans are ranked 13th in the league for total clearances per game, averaging 37, above Collingwood in 15th place, averaging 34.8 clearances, despite Brodie Grundy's dominance in the ruck.

IT’S A BIG WEEK FOR…
He was an extremely late addition to the team last week, with midfielder Ryan Clarke coming in for co-captain Josh Kennedy in the last list lodgement before the match. He repaid the faith the Swans had him in, limiting the normally influential North Melbourne midfielder Shaun Higgins to just 20 disposals - 4 in the first half. 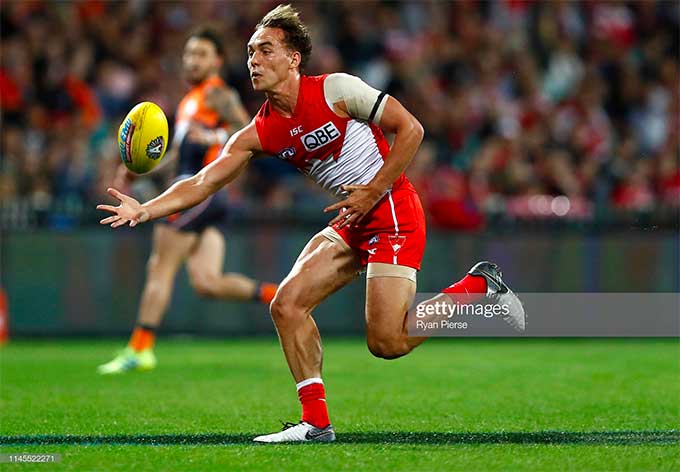 It really was a spectacular effort to be in with a chance to win, with just two minutes left…

The Swans have made two changes ahead of their Round 10 Marn Grook clash against Collingwood on Friday night,…