The Swans have made three changes from the round 23 team that thrashed Carlton by 81 points.

Returning midfielder Harry Cunningham has been omitted, along with forwards Kurt Tippett and Will Hayward.

Harry has been named as an emergency, alongside Aliir Aliir and Dan Robinson, and should they fail to play against the Bombers, they'll join Kurt Tippett and Will Hayward in the NEAFL grand final.

Speaking with Centrum team selection, Longmire believes Naismith has a lot to offer in the air, as well as on the ground.

“It’s good to have Naismith back in the team, he’s obviously important with his ability to get his hand to the ball and speed around the ground,” Longmire said.

“It was an interesting and tough decision, as we went through it in match committee.

“We’re confident he can come in and do the job for us.”

Naismith made a successful NEAFL return last weekend, playing his first game since injuring his hip against Hawthorn in round 19.

The 206cm ruckman amassed 40 hit outs and collected 19 disposals in an influential performance, and was enough for the selection committee to back him in for the crunch final.

“He got through the game really well,” Longmire added.

“He’s been training now for a number of weeks and has pulled up really well, and we expect him to really compete hard against what’s a good ruck set-up with (Tom) Bellchambers.” 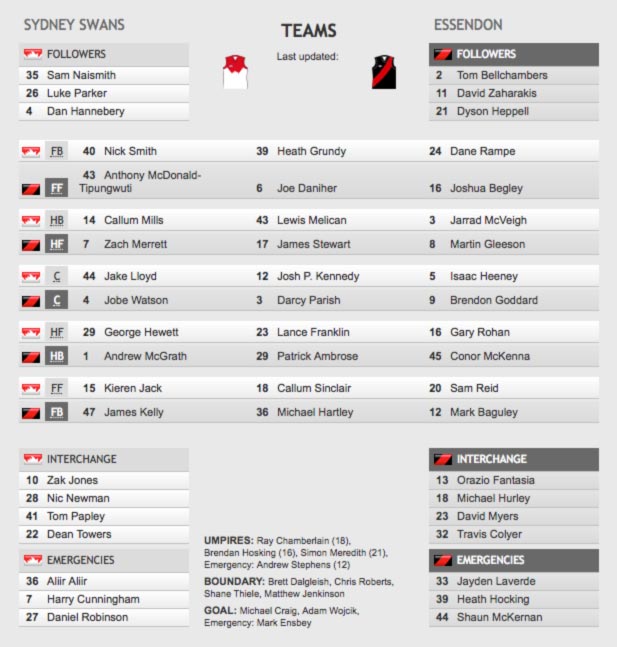 Josh Kennedy, Lance Franklin and Luke Parker have been nominated for the 2017 AFL Players Association Most Valuable Player…