There’s been a raging debate for the last two years over the introduction of red cards in the AFL, spearheaded by well-known and highly regarded figures in the AFL community.

The majority of discussion has centred on levelling teams once a player has intentionally or recklessly injured an opponent, with very few incidents of outright violence on which to use as a crotch.

Until West Coast and Fremantle played on Sunday afternoon, Tomas Bugg’s strike on Callum Mills and Jeremy Cameron’s two flying hits have been used as the measuring stick over the last two seasons.

The last act of serious violence on a football field, certainly in the last 10 years, was Barry Hall’s strike on Brent Staker in Round 4, 2008. 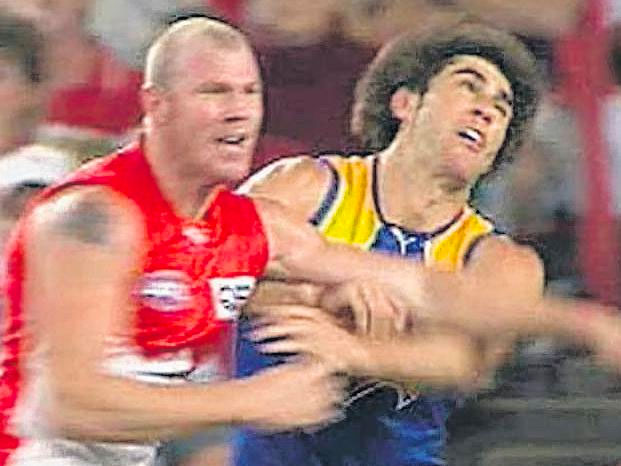 While both players recently caught up to talk about the incident on Fox’s 504, it left Staker’s family in a state of shock and ultimately derailed Barry Hall’s time with the Swans, leading to further acts of violence.

State leagues and grass roots football have had red cards, and have used them before – Will Minson was famously sent off the ground for umpire contact in a 2015 VFL match for Williamstown.

The days of clobbering blokes off the ball and behind play are long gone, with AFL great Leigh Matthews the on player to be charged with assault and de-registered for an off the ball strike.

Andrew Gaff’s unexplained moment of extreme violence has thrust the debate about violence in the game back to the top of the agenda.

While it’s something the AFL are clearly reluctant to act on, studies of head injuries and concussions have proven conclusively proven a link between degraded brain activity later in life from multiple concussions.

Andrew Gaff’s unexplained strike on the unsuspecting Andrew Brayshaw was reminiscent of Hall’s strike on Staker, calls for Gaff to face police action or be banned from the AFL are an overreaction.

The 18-year-old, Fremantle’s first pick in the 2017 NAB AFL Draft, has been ruled out of the rest of the season, and will be unable to eat solid foods for the next four weeks.

Fremantle coach Ross Lyon was equivocal in his desire for punishment to be meted out by the AFL.

“Andrew Brayshaw was king-hit 100m off the ball. He's got a fractured jaw and four displaced teeth that are caved in, and he'll be undergoing surgery tonight.

“Andrew (Brayshaw) is unlikely to play again this year.

“There's certainly precedents set. I think Barry Hall got seven (for his hit on Staker).”

“It's very distressing. My senior players certainly wanted retribution, and I had to stay out on the ground longer at three-quarter time to settle a couple down, and say 'don't bring yourself into disrepute',” he said.

The AFL has acted swiftly, with AFL MRO Michael Christian sending Andrew Gaff straight to the tribunal, with the highest grading possible for the strike, assessing it as intentional with severe conduct to the head.

“I’m very comfortable that it was severe impact, and obviously the contact was high," Christian said.

“Certainly it’s the highest grading that you can get.”

Red cards and send offs aren’t a new concept to sport – both major rugby codes have them as well as Soccer (or Football), with several Australian players falling victim in recent World Cups.

Former AFL umpires coach Hayden Kennedy said back in 2016 that umpires wouldn’t have a problem handing out red cards if it were necessary.

Ironically, the red card debate erupted on social media at the time for Tom Jonas’s late hit on Andrew gaff, which ruled the Eagles midfielder out of the match with concussion, with Jonas sent straight to the tribunal.

“If we think it's a report on the day, we will report it.

“If the laws of the game suggest that there are other ways of doing it, we will go down that way,” he said.

“We won't mind either way.”

There’s always been resistance from the broader AFL community and AFL House about introducing a send-off rule, fearing it could be used inappropriately, or inconsistently applied.

It’s more of a risk to leave a player who has committed an act of extreme violence out on the field, allowing opponents to square them up in retribution, as we saw on Sunday afternoon.

It’s time to take player welfare seriously and stamp it out of the game, or do we need replays of players like Dermott Brereton, Leigh Matthews and Alastair Clarkson to remind us of how bad things really were 30 years ago.

When a Horse is not a Horse