Hello Swans faithful. As part of The Swans blog's new segment, "Fantastic Fans", I'd like introduce myself, how I came to support this team and my journey following the Swans. It’s either this or watch Crapwood play the Western Bullflogs on a Friday night. In some circles I’m known as Mrs Blogs, or the fiancée of The Swans Blog creator Justin, or just Penny to some of you. So here goes…

My Nanna is the reason I support the Sydney swans. She is an original South Melbourne supporter, who attended the Lakeside oval every weekend to watch her beloved South play. She saw them win the 1933 VFL Premiership, attended the 1996 AFL Grand Final and watched both the 2005 and 2006 Grand Finals on television. Her passion for South Melbourne/Sydney could never be questioned, even into her elderly years.

She would refuse to leave a match, even when we were 60 points down with 10 minutes to go. “Just in case,” she would say, even if it was mathematically impossible to win. She would stay until the final siren, just to cheer the boys off, even if it was a 100 point drubbing. She could never say a harsh word about any player who donned the red and white. Tony Lockett was a “dirty mongrel” for what he did to Peter Caven, but once he became a swan, he was “misunderstood” and the Swans changed him for the better.

One of my fondest memories is watching the 2005 Grand Final with her, holding her hand in those last few minutes and experiencing that long awaited relief that her Swans finally got there. Shout out to Paul Roos, who called her for her 100th birthday (I don’t think she believed it was him though). My mum however got 100% fangirl, and told him we had a magnet of him on our fridge!

Growing up in the early 1990’s in primary school, I was one of 3 people who barracked for Sydney. The majority of my school consisted of Collingwood, Carlton and Essendon supporters. I remember footy day at school and I screamed at the top of my lungs, "Sydney, Sydney!," just to try to show everyone else that I was a proud Sydney supporter.

Fast forward a few years and Sydney recruited that “dirty mongrel” Plugger, and things started to change for the Swans. Plugger kicked 16 against Fitzroy in 1995 and the following year Mum, Nanna and I travelled to Whitten Oval, hoping to see a repeat. We lived in the Eastern suburbs of Melbourne, and travelling there was no easy feat, especially with no City Link back then. 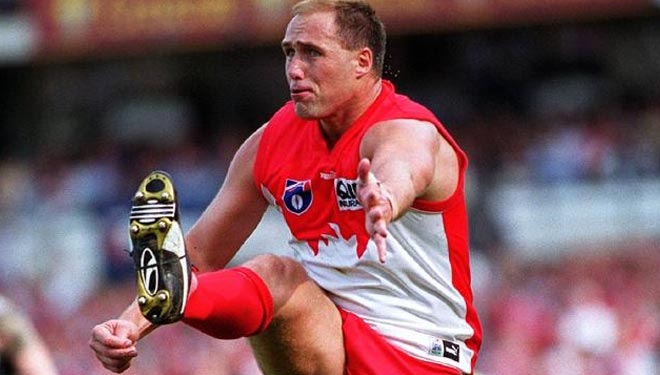 Fortunately Whitten Oval was small, so it was pretty easy to move around. At the end of each quarter, a group of us would change ends to watch the mighty Plugger! He only kicked 9 goals that day. His most famous kick will be ‘that point’ in the 1996 preliminary final. My parents gave up on the Swans after that Michael Symons goal, but I kept watching, screaming "run Maxie run," when Stewart Maxfield galloped down the SCG like his life depended on it.

Mum and Dad heard the shouting and we all gathered around the TV watching the rest of the game, jumping up and down like lunatics after the final siren (I still do this, it’s a wonder the neighbours haven’t called the police).

Years later, I met my ex who wasn’t a fan of football. I took him to a Sydney versus Hawthorn game back in the day. Unfortunately we lost and our defence got belted by some Hawthorn guy called Lance Franklin, who I called a wanker at one point. How things change! I had two options to watch the Swans - free to air on TV, or recharge my prepaid Telstra dongle, just to watch them on my iPad, which cost about $50 dollars per game.

In 2014, I was lucky enough to score a ticket to the Grand Final. Sitting up in Row Q, deep in the clouds, I witnessed an awesome first 10 minutes by the Swans. Not much else went their way for the rest of the day, defiant as I am, I stayed until the end, refusing to leave, wanting to get my $333 worth. After the game, I got drunk with my girls at Transport Bar, with constant replays in the background.

After my breakup I searched online for my next partner – with one of my criteria being he had to support AFL, and it didn’t matter which team it was! I ran into a really cool photo of a guy wearing a Swans scarf. I clicked ‘smile’ and didn’t even read his profile, he could have been a serial killer for all I knew, but he barracked for the Swans.

When he found out I was Sydney too, he clicked ‘smile’ and spent the next 30 minutes refreshing the page, in the hope that I would reply. If you didn’t already know, that guy turned out to be Mr Blogs. 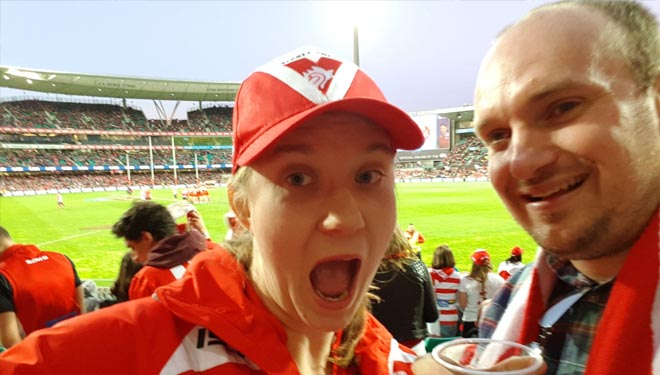 On our first date we both so nervous that our conversation teetered on almost nonexistent. Until I was like so what about that Grand Final hey?… and here we are today! Ironically, he was at the 2014 Grand Final too (however he left early #notatruefan, just kidding darl!), and we could have passed each other at the ground, not knowing who the other person was.

When I told my mum I met a guy who was a Swans supporter, she was overjoyed. To this day, she is The Swans Blog's No. 1 fan, and will spend ages talking to Justin about the game and analysing every player and scenario. It usually goes like this:

Justin – No, actually he didn’t, he got 20 possessions and limited a key forward to 1 goal

Since meeting "Mr Blogs", we have travelled to see the Swans play in Adelaide, Melbourne and Sydney. We were there at the 2016 AFL Grand Final, afterwards spending the majority of the weekend in a foul mood. I watched Greys Anatomy for 8 hours straight, while my drunken friends were sending me videos, taunting me going ‘stuff the swans, cheer the doggies’ at their annual Grand Final party! The only good moment after that weekend was getting our rescue dog Buddy. However, we have to be careful now watching the game on TV, because yelling “YAY BUDDY!!!” makes our dog think he is in trouble and hides under the couch!

It was Justin’s idea to start a blog back in 2017, and honestly I wasn’t a fan of it. I mean seriously, who would read a blog about the Swans? And guess what - a lot of people do! He spends hours and hours, checking stats, thinking of new ways to entice readers and recruiting people for his podcast. He spends hours after the match, writing a match report, doing player ratings, all for the love of the game. While it annoys me at times, I can’t fault him, because we both love this team and I love that he loves the Swans just as much as me. 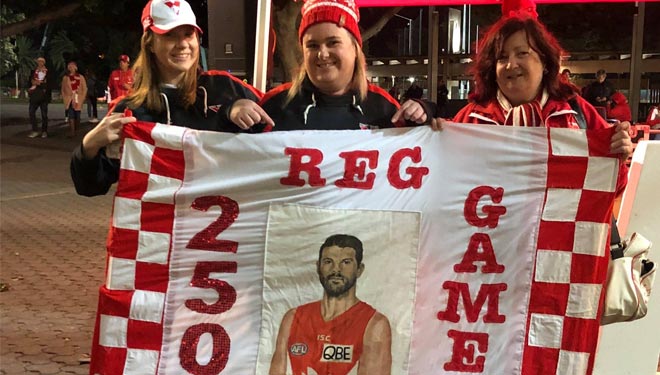 "Reg is our Edge" banner at Heath Grundy's 250th game

Being a Swans supporter has given me the opportunity to meet other Sydney fans. One of my friends at tennis is a Swannie, and our bond is so strong due to our Sydney passion. I’m looking forward to our girl’s trip this year to see Sydney take on West Coast. Justin has newfound friends in his regular podcasters, and it’s amazing to think all these friendships are forged due to our passion for this team!

I got accused once of ‘not being a true Sydney supporter or just a fan’ and to ‘go support the GWS Giants cause I don’t know where my priorities are’; it was disheartening to read. I may yell and scream at the TV, and at the game. I may be shitty with our performance, but you will still see me week in, week out, watching the red and white. I love this club. My future kids will be Swans supporters, and I will continue to support this club forever. Until then its fingers crossed for a 3rd time lucky Grand Final appearance! Until then CHEER CHEER!!

The AFL’s equalisation policy has always been about narrowing the spread of the competition. Teams that have sustained…