This is the second article in a series of five where our columnists will be reviewing season 2018, beginning with the 2017 post-season through to the conclusion of the 2018 finals.

After handing the West Coast Eagles their only two losses of the season to Round 13, narrowly losing to North Melbourne and Adelaide at home, and beating perennial finalists Geelong and Hawthorn away from the SCG, the Swans were primed for a red-hot second half of the season.

Despite being one of the flag favourites before the season started, long-term injuries to Sam Reid, Sam Naismith Callum Mills and Lewis Melican, along with the retirement of Kurt Tippett stripped the squad of key position depth.

Even with Dane Rampe shifting to full back, Heath Grundy to the back-pocket and Harrison Marsh filling in key positions, the dramatically undersized Swans defence, along with their inconsistent midfield, averaged just 70 points against.

It was a stoic effort but there were a lot of questions from football pundits – just how long could the Swans defence last? It wasn’t long before we found out, with two of the most abject losses for years, before stunningly pulling themselves off the canvas right before the 10 count.

Second half in review

It’s fair to say the Swans second half of the season was a massive disappointment compared to their first half. The very same coaches that guided the Swans to an unbelievable 10-3 record, lauded as magicians, were rounded on in stunning fashion less than a month later.

The loss to Richmond in Round 15, while disappointing, was still in the balance early in the last quarter, even if the Swans never really looked at the races. Lance Franklin’s fourth goal of the match reduced the margin to four points, before the Tigers ran away comfortable winners.

It was a warning for what was to come, despite the fact that the writing had been long on the wall before the disappointing loss to Geelong. Turning a hard-fought quarter time lead into a two-goal half-time deficit, while conceding 3.7 and playing atrocious football took some skill. 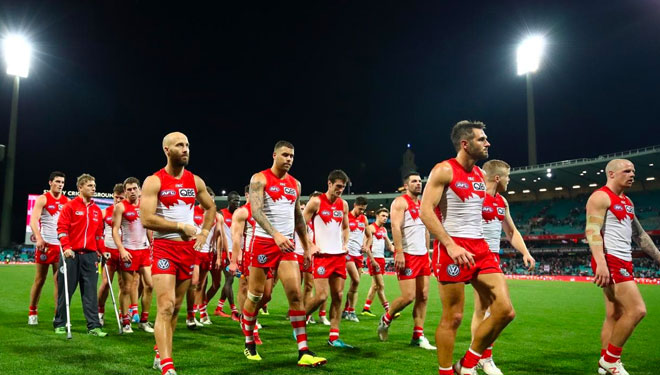 A third-quarter burst put the Swans nose just in front while the Cats kept blowing chance after chance, before finally getting on top. Tom Kelly’s goal put them out of reach and Harry Taylor’s major sealed the win, despite kicking 8.23 and wasting more chances than Sydney had shots on goal.

Arguably one of the best one-on-one match-ups of the season between Majak Daw and Aliir Aliir decided a fast-paced, see-sawing battle between the Kangaroos and Swans at Etihad Stadium in Round 17.

Daw was nigh-on impossible to stop, booting four goals and almost winning the match off his own boot. The Swans booted four goals in a row to start the final quarter, before 3 goals in as many minutes by the Roos’ put them back in front.

Aliir moved forward and snagged a goal off the back of the pack, sealing an incredibly hard-fought win for the Swans. Aliir and Daw were both superb, but it was Aliir that took the plaudits, finishing with 23 disposals and the match winning goal.

Then Round 18 happened. The Swans thoroughly destroyed the Suns in the first quarter and should have been another 3 goals up if it wasn’t for their wastefulness in possession and converting opportunities in front of goal. 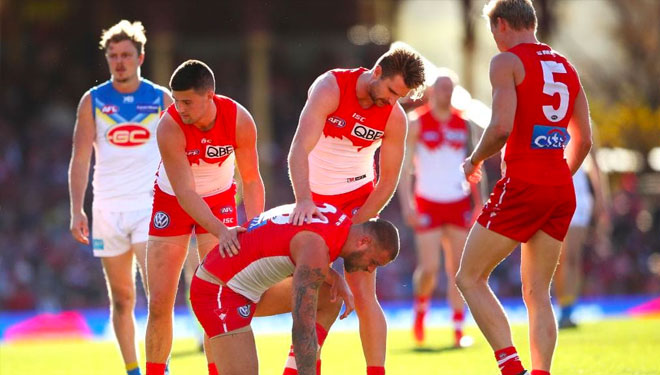 Two quick goals gave the Swans hope, dragging the margin back to 8 points, before the fumbles set in again, the shocking turnovers and the complete lack of composure coming out of defence. It as if the teams had swapped kits at quarter time and again midway through the final quarter.

Despite copping a flogging in the last quarter against the Bombers in Round 19, the Swans were well and truly in the match up to half-time. With Lance Franklin barely fit enough to play, the Swans managed a single behind in the last quarter, scoring 4 goals to Essendon’s 9 in the second half.

The margin in the end flattered the Swans – they were well and truly out played in the second half. Their 43-point loss sent them free-falling down the ladder, the biggest single-round drop for decades from fourth to ninth.

With pride on the line, Lance Franklin turned his horrid form around with one his games of the season. With the Collingwood defence falling to the way side, he booted 6.4 before Tom McCartin’s toe-poke saved the Swan.

Brodie Grundy and Mason Cox almost dragged the Pies across the line in the fourth quarter, while Alex Johnson did his best to slow the big American in his AFL comeback game. Varcoe and Franklin went goal-for-goal in the first quarter, before the Swans turned the match on its head with a stunning third quarter fightback. 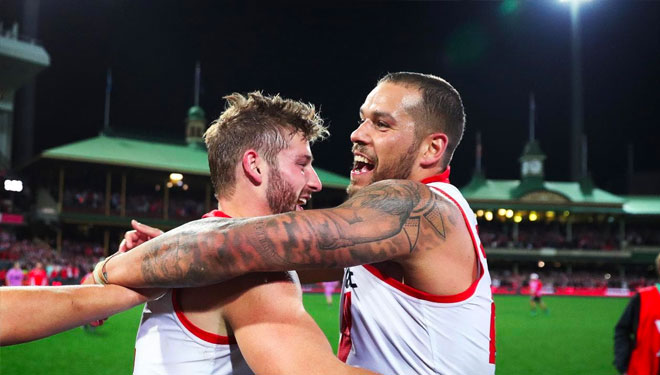 Johnson’s amazing comeback turned to heart break less than a quarter later with another ACL rupture, this time in his good knee. The Swans, staring down the barrel with the Demons dominating the match, turned his tragic injury into the drive they needed.

Despite not kicking a goal in the last quarter, the Swans hung grim for the seasons’ best rear-guard defensive effort. Isaac Heeney’s monumental 4-disposal last quarter after being shifted to full back, including the AFL’s Mark of the Year over Jesse Hogan, was crucial in the Swans winning the match.

They carried the form through to Round 22 against the Giants, turning a half-time deficit into a convincing 20-point win. It wasn’t until early in the last quarter the Swans took the lead for the first time, with Luke Parker and Lance Franklin kicking two-goals each.

The win put them back into the top 4 equation with destiny in their own hands. Beat Hawthorn, slide as high as third, while lose and at worst, finish sixth.

Immediately following the Giants game, it was reported that Luke Parker and Lance Franklin had injured their groins. Franklin was seen leaving the game in the final minute rubbing his thigh, while Parker spent time on the bench receiving treatment.

Come game day, both players failed fitness tests and the Swans went in without their best midfielder and best forward. It almost looked like it didn’t matter, with the Swans stunning the Hawks, Kennedy’s goal putting them 26-points up half-way through the second quarter.

The Hawks fought back, booting four consecutive goals to draw even. The game rested on a knifes-edge until Bruest’s goal with just over a minute left in the match sealed the Hawks’ win.

The expectations and performance for most of the second-half of the season were worlds apart. Coming into the bye in second place with a 10-3 record, handing the eventual premier’s their second loss of the season, the Swans broke bad, winning just one of their next five matches, including two morale destroying losses. 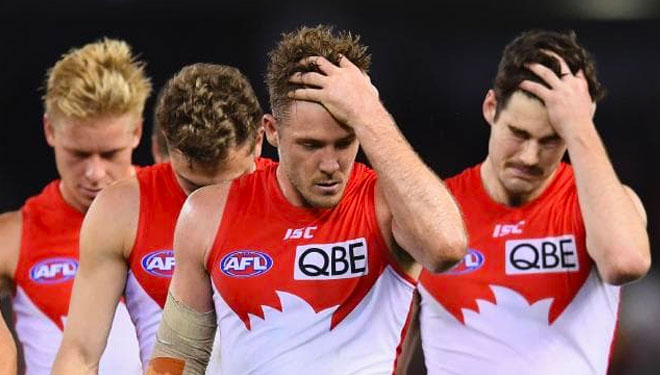 Despite three despairing performances, Alex Johnson’s stirring comeback drove the Swans to the most unlikely turn around in form, denying Collingwood a top-two finish, along with knocking the Demons and Giants out of the top four.

When expectations were at their lowest, the Swans delivered, but under the glaring spotlight of expectation, they wilted. Despite missing Franklin and Parker, they almost gave themselves the double-chance.

This is the fourth article in a series of five where our columnists will be reviewing season 2018, beginning…

After what seemed like a relatively quiet trade period, eyes quickly moved to the draft to see how the…