This is the fourth article in a series of five where our columnists will be reviewing season 2018, beginning with the 2017 post-season through to the conclusion of the 2018 finals.

Without Franklin, we’re fried. Many of us like Phil Davis. He’s a quality defender and seems like a good bloke.

However, we all wished an alien spaceship had landed on the SCG and whisked him away during the Sydney Swans’ ill-fated elimination final against GWS.

Otherwise he wouldn’t have shown a packed ground and hundreds of thousands more TV viewers a stark and painful truth - that the Swans rely far too much on headline-pulling, marketers’ dream, forward Lance Franklin.

And when Buddy is playing injured - as he clearly was on September 8, hampered by an ongoing hip problem - he’s going to have his pants pulled down by a player of Davis’s quality. 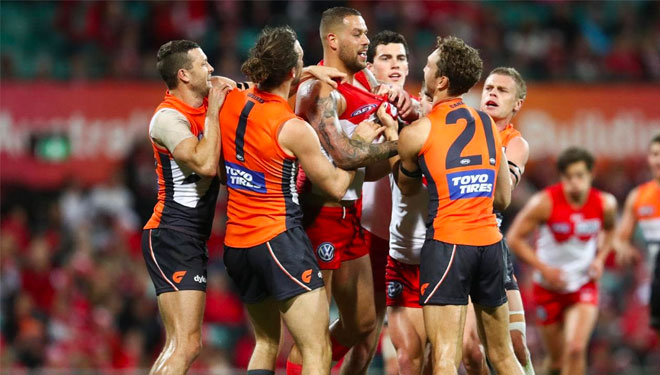 Remarkably, given Franklin’s obvious movement problems early in the match and Davis’s dominance, Sydney players continued trying to use this avenue to goal when it clearly wasn’t working.

"There's a big reliance upon Lance and we don't want that to continue to happen, we want to change it and we'll try and change it," coach John Longmire said after the game, stating the bleeding obvious.

Even more remarkably, the mis-match between Davis and Franklin was overshadowed by the Swans’ collective miss-fire on the night.

As a finals ‘campaign’ it was a nightmare that twitching, moaning Swans fans never woke up from.

The Giants were undeniably impressive and kicked eight straight goals in the second and third quarters to give the Swans a 10.19 (70) to 4.6 (30) hiding and advance to a semi-final against Collingwood.

Embarrassingly, the 49-point margin flattered the home team, with the Giants wayward in front of goals.

These stats probably still make you cringe, months later, but to re-cap:

GWS exerted Sydney-like pressure on the Swans from the first whistle and were relentless all over the ground, with Toby Greene causing havoc for Sydney defender Zak Jones.

Greene had 27 disposals, kicked three goals and took nine marks, to the chagrin of Swans supporters with no love for the high-kicking, aggravating small forward.

Sydney’s midfield was comprehensively beaten, with opposition mids Callan Ward and Lachie Whitfield running rampant. Young forwards Will Hayward and Tom McCartin couldn’t get their hands on the ball and their delivery into the forward-line was haphazard and at times, just plain sloppy.

"Nothing went right for us and everything went wrong," Longmire said.

"We just didn't get anything right."

Dan Hannebery (24 possessions, 10 contested, eight marks and five clearances) and captain Josh Kennedy (27 touches) tried hard throughout, while Aliir Aliir started well with a series of fine first-quarter marks, but his ground ball work was average and the Giants stopped bombing the ball in long into their forward 50, negating his influence.

Harry Cunningham’s run on the wing was generally good and was probably the best of a poor Swans bunch with 25 disposals at 84% efficiency and seven marks.

Of Sydney’s four paltry goals, Tom Papley kicked two of them. He was the home side’s most dangerous forward, on the rare occasions when the ball made it into the 50m arc.

It was a disappointing and frustrating end to season 2018 for Sydney, but not probably not unexpected given the changing on-field rotation caused by serious injuries to key position players (Sam Reid, Callum Mills, Lewis Melican, Sam Naismith and later in the season, Nick Smith), the decline of senior players (Kieren Jack, Hannerbery) and intermittent health/family problems for Gary Rohan, Heath Grundy and the phenomenally unlucky Alex Johnson.

Sydney’s results varied from awesome (generally away from home - they beat all top 8 opponents except Richmond!) to atrocious (Gold Coast…).

The talented youngsters Hayward, McCartin and Ben Ronke, were tired by season’s end and (with apologies to these players’ mothers), some in the Swans’ selected best 22 were not, actually, best 22 players in the NEAFL let alone AFL.

Fit again former Swan Dan Hannebery, enjoying an injury-free pre-season for the first time in years, has suffered another…